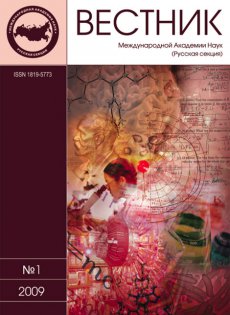 Trombosis of Arteries and Veins: What to Do?

Formation of thrombus in arteries, veins, heart and thromboembolism in different organs is caused of myocardial infarction, stroke, pulmonary embolism. This is the main cause of disease and disability of the world\'s population. Proper prophylactic of the thrombus formation can prevent unexpected death, increase the live duration, improve its quality and decrease the society\'s burden for the treatment and rehabilitation.

Prospects of Bipathy Use in Nanotechnologies

Ultralow doses have been used and studied in medicine and biology for more than 200 years. And now it is time to study them fundamentally and use them in techniques and national economy. By way of example of antibodies and other endogenous and exogenous molecules it was first demonstrated that there is practical possibility to use specific sensitizing effect of activated drugs containing ultralow doses of the starting substance. Phenomenon observed at simultaneous administration of ultralow (homeopathic) and usual (allopathic) dose was named bipathy. Experimental studies showed that ultralow dose modifies effects of the usual dose.

«Ecological Limits» of the Global World

The part of biotic regulation in understanding of natural and socionatural systems functioning mechanisms is shown in the article, the need in civilization development ecological limits and restrictions research is based.

Global challenges of atomic energetic (to civilized society) which are connected with the inner problems of development the nuclear technologies are examined in the article. The main of them consists in ensuring of nuclear and ecological security of atomic power-stations and atomic complex as a whole. The role of Chernobyl catastrophe as a challenge and warning to civilized society is shown. Modern rise of atomic energetic development s is connected with transition from the «epoch of firewood and coal» (XIX — start of XX centuries) to «epoch of hydrocarbons» (the end of XX — the beginning of XXI centuries) and to the «epoch of electric energy using» (XXI century).

In the paper the forecast of hydrocarbon sources of energy exhausting in XXI century is examined. The means for decreasing expenditure of classic energy sources by gradually change to alternative sources of engineering — hydrogen, renewal and «nonclassic» nuclear using newest Russian achievements in the area of powerful proton accelerator creation.

Globalization is spread all over the world, but shows distinctly in each country. The ecological situation in modern Poland looks as average European: there are the serious environmental problems in the country, a lot is done to solve them by a development of education, through activity of ecological movements and organizations. These days in the country extends both political and the public activity, directed on clearing of Poland and Europe as a whole from genetically modified organisms. However such activities are usually based not on the search of the path to the sustainable development, but on interest to increase «food sovereignty», or search for «a key, opening the new international markets».

Complex Research of Human as Humanitarian and Social Science Object

Approaches to humanitarian knowledge organization, which could provide complex human study in information society foundation conditions are considered in the article.

The idea of «cultural image of the World» in context of cuturology development as science is discovered in the article. It\'s shown that this idea becomes principal in modern culturological research.

Ecological Tradition in Russian Artistic Culture: Correspondence of the Earth and Soul

Russian people\' spiritual and natural habitat\'s deep mental connection which defines structure of culture, its epic and historical uniqueness during the long period of time is analyzed in the article.

Social crisis as immanent attribute of social development have an object-subject nature. That means that it occures in case of social relations objective develoment, and crisis and anti-crisis behaviour regulation mechanisms are forming in human psychic and mind. Сonsiderable part of these mechanims are implemented on management motivation resources use. Russian politicaleconomical and managing subjects and objects behaviour management motivation resources in transforming economy burdened by system crisis conditions are considered in the given article.